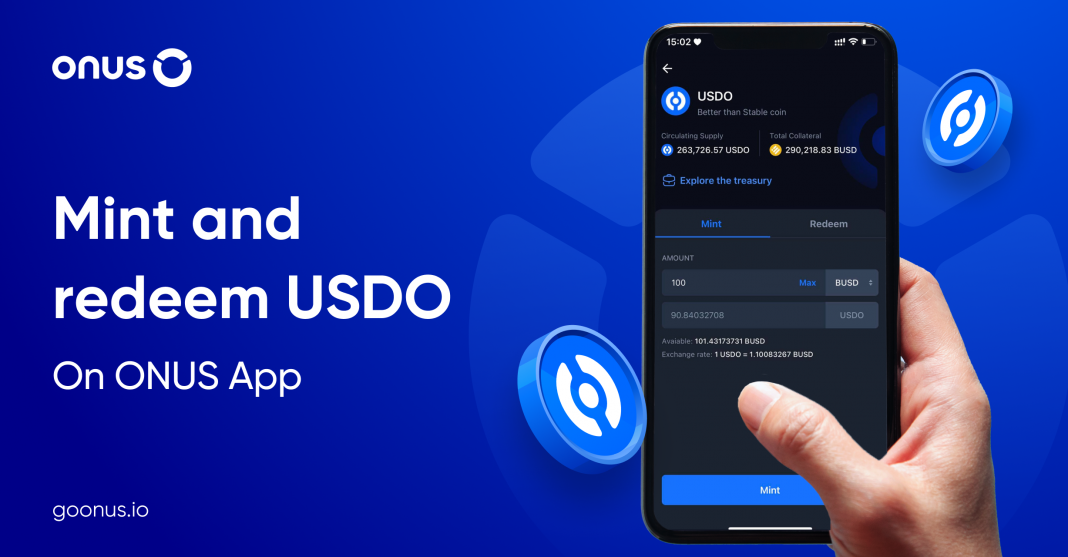 Since the launch of the mainnet in early November 2022, thousands of users have mint USDO for free, resulting in a 10% increase in just over a month. The total collateral value for USDO is currently close to 300,000 BUSD (about 7.5 billion VNDC).

Recognizing that many users want to own USDO but are unfamiliar with the DeFi space, ONUS has integrated a new feature that allows users to mint/redeem USDO directly from the ONUS application.

How to mint USDO on the ONUS App

Mint USDO is the deposit of stablecoins into the USDO Vault in order to generate the corresponding amount of USDO as specified in the smart contract.

According to the mechanism of USDO, you need to use BUSD to mint USDO. However, for user convenience, the ONUS application supports minting USDO with three different assets: BUSD, USDT, or VNDC. 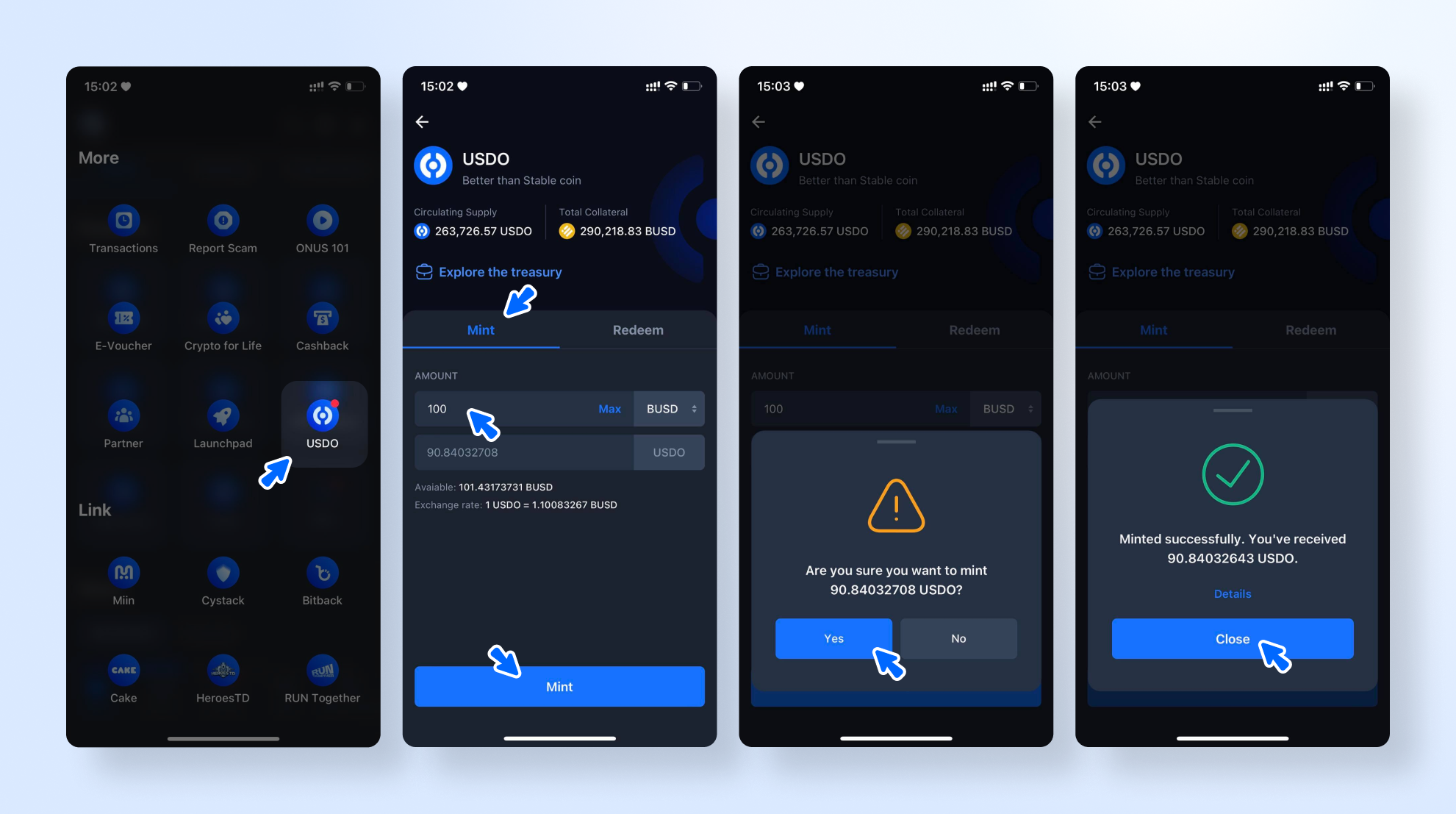 Step 1: At the main screen, scroll down to the Features section and select “More”. Select USDO.

Step 2: Click on the type of asset you want to use to mint USDO: BUSD, USDT or VNDC.

Step 3: Enter the amount (eg, BUSD) you want to mint into USDO. The system will display the corresponding USDO amount.

How to redeem USDO on the ONUS App

Redeem USDO is when you burn USDO and get back collateral stablecoin (BUSD) at USDO/BUSD exchange rate at the time of Redeem.

You can easily Redeem USDO directly on the ONUS app by following these steps: 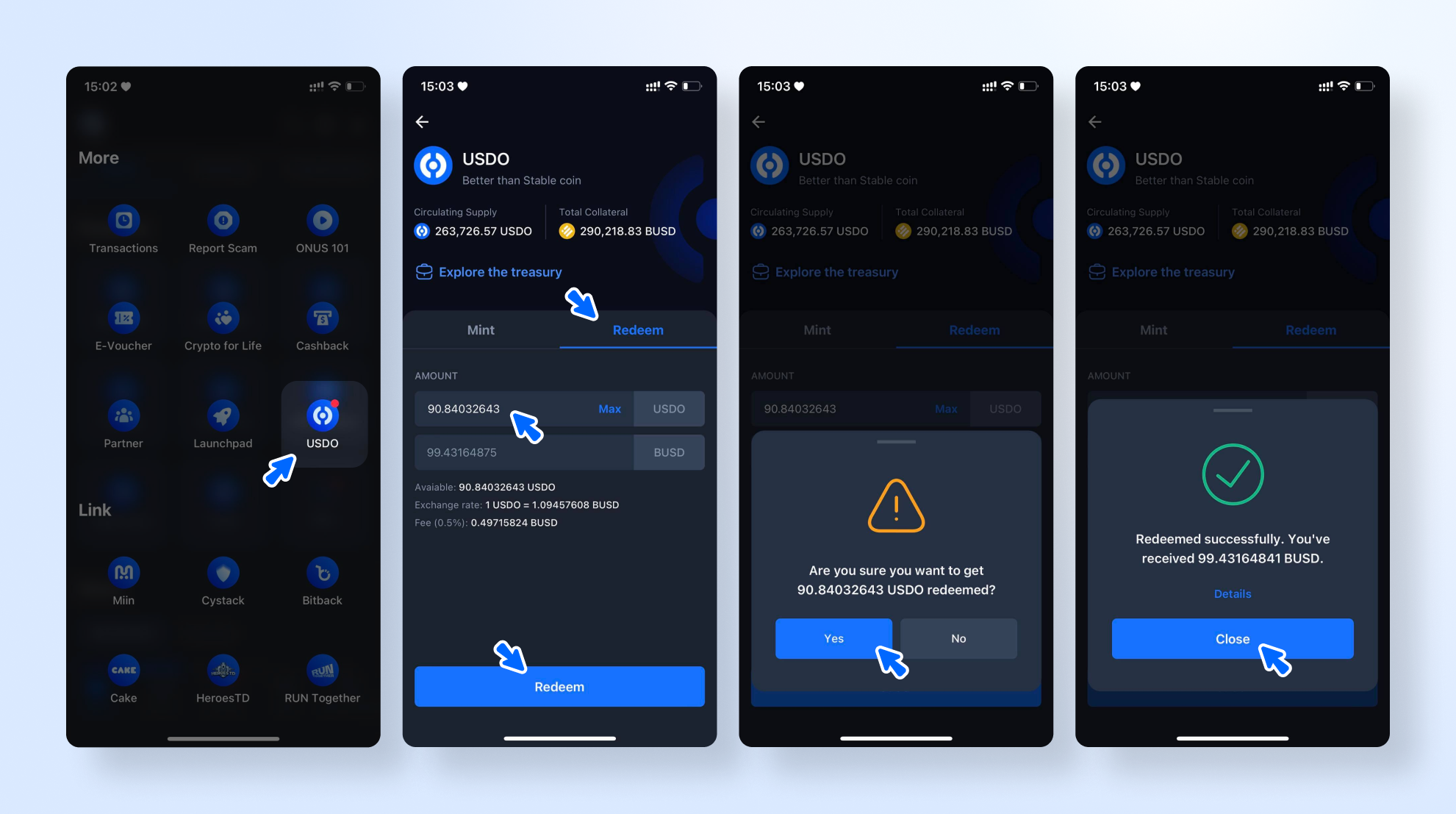 Step 1: At the main screen, scroll down to the Features section and select “More”. Select USDO.

Step 2: Enter the amount of USDO you want to burn to get back BUSD. The system will display the corresponding BUSD amount.

According to the USDO mechanism, when users Redeem, they must pay a fee of 0.5% of the Redeem value. A portion of the Redeem fee (0.3%) will be added to the collateral immediately, increasing the value of USDO.

USDO is a “Special Coin” built in the ONUS Chain ecosystem. USDO is not only stable and secure as a stablecoin, but also has the potential to increase in price based on the development of the ONUS Chain platform.

According to the special mechanism of USDO, to generate (mint) USDO, users need to lock BUSD to receive USDO at 1:1 exchange rate.

The Treasury consists of:

Furthermore, successful projects deploying on the ONUS Chain are incentivized to contribute a portion of their revenue to the Treasury in order to increase the value of the USDO.

Aside from accumulating USDO as a safe haven asset and profiting from its consistent, secure growth, USDO investors can also earn profit:

You can store USDO on the ONUS app to get:

If you store USDO on a DeFi wallet (ONUS Chain network), there are numerous ways to boost your earnings with USDO: